Your registration fee and the kind help of sponsors keeps TEM alive.

Over the years – in Paris 2012, Berlin 2013, Munich 2014 and Istanbul 2015 – TEM has been supported by a large number of delegates and sponsors – people who’ve helped to transform it from a small gathering of 50 delegates into an international conference, attended by 160 delegates from five continents.

All of our sponsor packages for TEM 2017 are now sold out, so we’d just like to say once again, thank you to all of our kind sponsors. 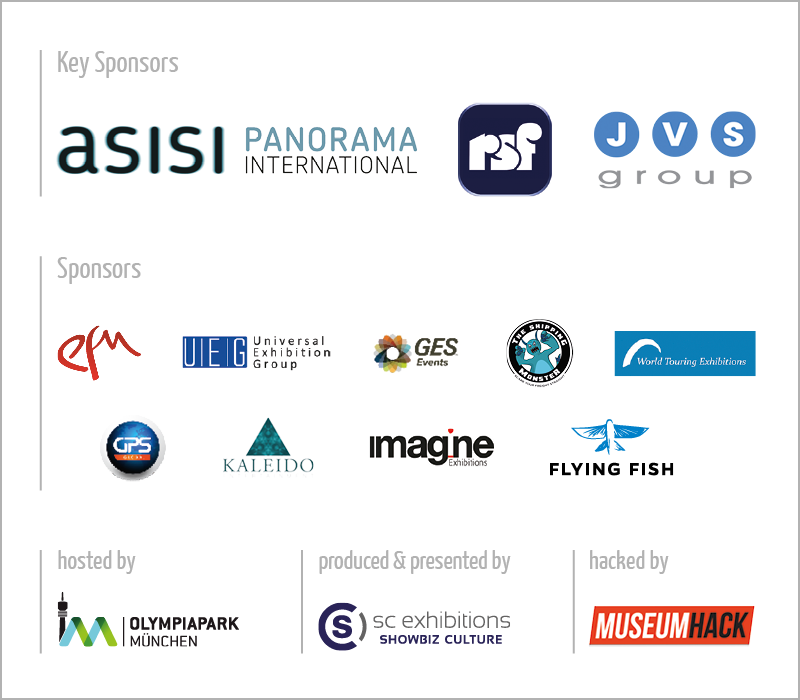 Yadegar Asisi has made a name for himself among an international public with his impressive Panoramas – the largest in the world. Millions of visitors have already seen his works, which are currently presented in the German cities of Berlin, Leipzig, Dresden, Pforzheim and Wittenberg, and in the French city of Rouen.

Asisi’s projects are realized under the management and coordination of asisi Panorama International. When developing a project, a team of internationally experienced project managers support partners throughout the entire process, from the idea to the project audit, right up to the realization of the panorama exhibition.

Among Asisi’s recent work has been the panorama “Titanic – The Promise of Modernity” in Leipzig. This focuses on the sinking of the passenger liner as an example of the hubris of man, and takes the observer 3,800 metres below the surface of the water to view the shipwreck. Asisi has also recently created “Luther 1517” in Wittenberg, dedicated to the events that took place in Wittenberg 500 years ago, when the monk and scholar Martin Luther published his 95 Theses on the reform of the Catholic Church.

Later in 2017, a new panorama building is to be constructed in cooperation with Hanover Zoo, very close to the zoo’s premises, where visitors will be able to enjoy Asisi’s new panorama “Amazonia – The Fascination of the Tropical Rainforest.” Asisi will also be opening a new version of the panorama “Pergamon” in Berlin. The original edition of this presentation opened in 2011 and focused on daily life and architecture in this ancient city.

For more than 30 years, RSF has manufactured AV equipment dedicated to museums and live shows. Today, they offer the largest, most advanced, and most innovative range of audioguides, tourguides and Audioguide solutions on the market, used by more than 6000 museums, galleries, archaeological parks and heritage sites, including the Uffizi in Florence and the Prado in Madrid. RSF are proud to be the sole suppliers of most major exhibition providers, including Premier Exhibitions, Plastination and Semmel Concerts.

RSF was founded in 1974, when they made analogue synthesisers for concerts, before later moving towards creating audiovisual equipment designed for museum-goers. Over the years, RSF’s team has developed many innovative audioguide features. In 2004, they produced the first audioguide with a three-month battery, allowing multi-month autonomy, and in 2005, they were the first to create audioguides with an “auto-start” feature. They have also created audioguides featuring multi-channel digital transmission, wireless multimedia interactivity and introduced the “point and click” concept.

Recently, RSF teamed up with the Van Gogh Museum to produce the exhibition “Meet Vincent Van Gogh” – an immersive, hands-free, and multimedia-rich experience that revolves around RSF’s Optima6 multimedia guide. This exhibition has now been awarded the Thea Award for Outstanding Achievement for “Immersive Touring Museum Exhibit.” The Thea Awards are internationally recognized as the themed entertainment industry’s equivalent of the Academy Awards.

RSF’s field of expertise and values make them the ideal sponsor for TEM, as over the years they have built a strong relationship with SC exhibitions, based on professionalism, trust and friendship.

As a promoter of exhibitions, performances and events in the Czech Republic, Slovakia, Hungary and Poland, they have promoted shows including “Titanic,” “Gateway to Space,” “Body The Exhibition,” “Ennio Morricone,” “Hans Zimmer,” “Jean Michel Jarre” and “Harry Potter in Concert.”

As a producer of touring exhibitions, JVS Group create shows that are high quality, educational, entertaining and interactive. Their exhibition “Cosmos Discovery” is the largest travelling astronautics exhibition in the world and tells the story of manned space flight from its beginnings to the present day. Within, across ten themed galleries, visitors experience the adventure of space exploration, explore humanity’s greatest achievements in space and see over 200 authentic artefacts from space missions.

The exhibition features interactive experiences, audio, video and 3D augmented reality, and includes the cockpit of a space shuttle, spaceship and space station parts, models of rockets – such as a full-size model of the American Mercury spacecraft and a giant model of the Saturn V rocket – space suits and original documents. The exhibition combines art, science and history, and is ideal for individuals, families and schools.

JVS Group also develop events, including golf tournaments, sports events, awards, teambuilding events and fashion shows, among others. Whenever creating an event, they always focus on the details to ensure that the client’s vision is realized.

For the exhibition “Cosmos Discovery” (in Lisbon, Portugal, until 30th July), visit: www.cosmosdiscovery.net

Produced and Presented by

If you have any questions or ideas about TEM, drop an email to us to find out how we can get you involved.

It is about you – take the chance to be an active participant in shaping and influencing the future of TEM.