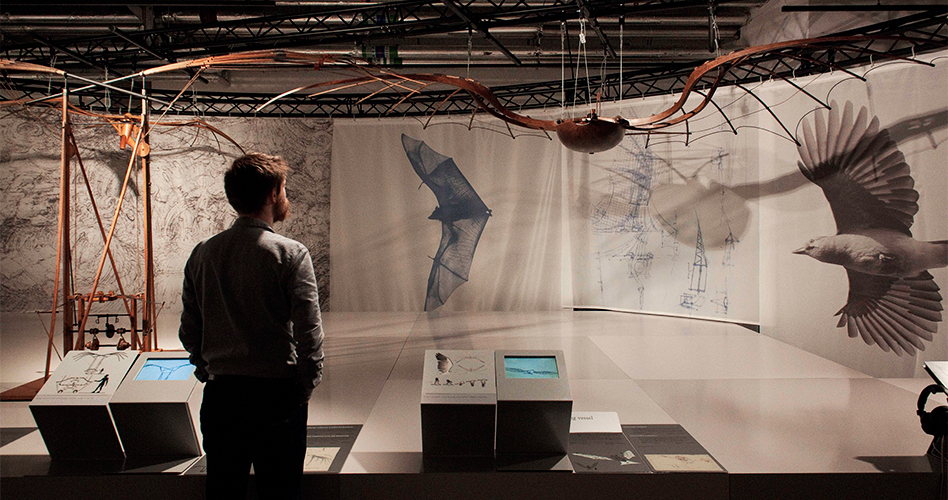 Five hundred years ago, Leonardo Da Vinci was spending his twilight years at Château du Clos Lucé in Amboise, France. After a long and successful career spent painting and designing, he’d settled down in this small town at the invitation of the French king, and was now creating fabulous sets, special effects and machines for festivities and events, all meant to impress the nobility. This was nothing new for him. Da Vinci’s famous “helicopter,” with its corkscrew body, designed earlier in his life, was probably made for a wedding. And his self-propelled vehicle, rather than an early attempt at making a car, was perhaps designed for the theatre.

It’s not the way we normally think of Da Vinci: as a special effects expert hired for parties. But then, for many, what we know of the renowned polymath is limited to his most famous works: the Mona Lisa, the Last Supper, the Virgin of the Rocks. Given his fame, you might well ask, what else did he create? And why?

If you want answers, you should visit the Science Museum, London, where a travelling exhibition is currently exploring the concepts and machine designs found in Da Vinci’s mechanical drawings; the subjects of these drawings range from fantastical pieces, meant to show-off the renaissance master’s design skills, to less flashy, yet nonetheless innovative improvements to known technologies – the practical designs that enabled him to pay the bills. With this portfolio, Da Vinci gained the support of the nobles of his day, who employed him as an architect and military engineer.

As many of Da Vinci’s most famous designs were either attempts at exploring a concept, or showpieces for potential clients, they were never physically created – they existed only on paper and in his mind’s eye. Consequently, to bring the polymath’s designs to life, the exhibition is built around 39 models, made in 1952 in Milan, supplemented by additional models from the Science Museum’s own collection. As you explore the show, there’s model machines of war (a major interest of the 15th century nobility, and so a lucrative business for Da Vinci), manufacture and flight, reflecting the span of Da Vinci’s career and interests.

What becomes clear as you walk through the exhibition is that although Da Vinci was just one of many men with a portfolio of designs searching for work, he differed from them due to his approach: Da Vinci’s designs included more precise details, particularly with regard to mechanical components, and he drew his inspiration from nature, closely studying what he observed and learning from it, before applying his findings to his art and machines. Most famously, Leonardo studied flight by observing birds, and in particular, the movement of their wings; from these observations, he designed his famous glider and flying vessel. 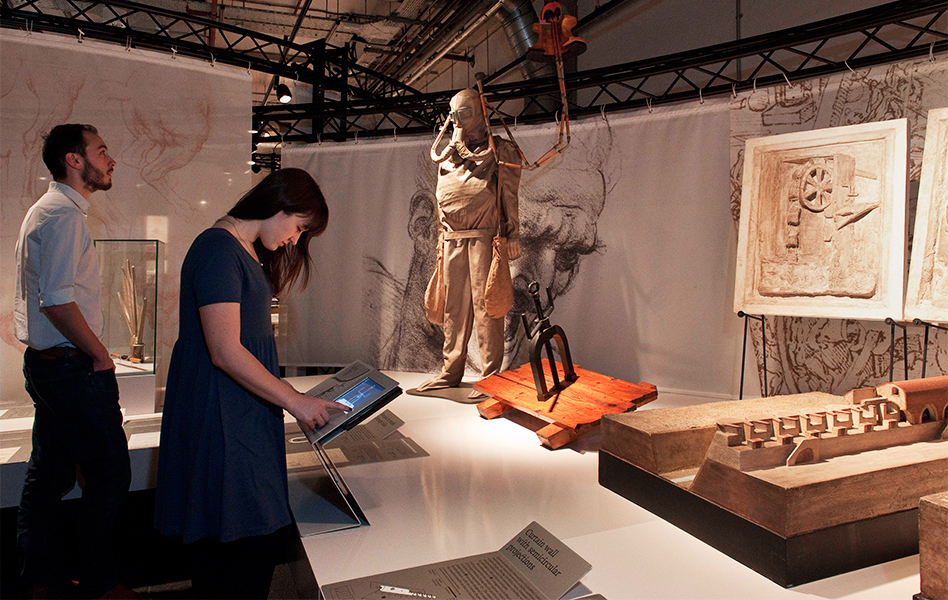 A diving suit and models, based on Da Vinci’s design drawings. © Science Museum.

To help visitors better understand the context of Da Vinci’s designs, the exhibition places each object on a scale (a sort of spectrum of invention): his giant crossbow, meant to fire large stone balls, and his flying vessel – built with wings inspired by the skeletons of bats – are each classified as “technical dreams”; his aerial screw “helicopter” (which Da Vinci knew wouldn’t fly due to a lack of propulsion), his pyramid-shaped parachute and glider are regarded as projects that were unworkable at the time; his diving mask for breathing underwater is an “invention”; his machine for cutting files and diving suit are classed as improvements of existing techniques; while his self-propelled vehicle, church on two levels and Bond Villain-esque mountain fortress are all regarded as continuing a known tradition.

Each model is accompanied by informative information panels and Braille diagrams. Some also have videos showing 3D animations of Da Vinci’s designs. A fun addition accompanying the Science Museum’s own models from 1952 are the original ’50s labels, highlighting the different approaches to interpretation between then and now (the 1952 labels are far more technical than their modern incarnations).

The exhibition also features a variety of fun interactive elements: video screens allow you to explore a timeline of Da Vinci’s life and work, whilst also providing cultural, political and social history from the 14–15th centuries; and hands-on interactives encourage visitors to learn about cogs and pulleys, the movement of wings, and the similarities of forms in nature, among other topics.

“Leonardo Da Vinci: The Mechanics of Genius” provides an engrossing insight into the mind of the polymath, taking us beyond the common conception of the bearded, elderly genius, hidden away in his workshop painting, to reveal Leonardo as an innovative young man of his time, commissioned to improve the technology around him. Sometimes this meant designing machines of war. Other times, entertainment for festivities. And sometimes, he could explore his personal interest in flight. In popular culture, Da Vinci’s practical contributions to life are often overlooked in favour of his breathtaking works of art. This is understandable, but sometimes it’s fun to see the man behind the myth. Even geniuses need to make a living.

“Leonardo Da Vinci: The Mechanics of Genius” is at the Science Museum, London, until 4th September 2016.